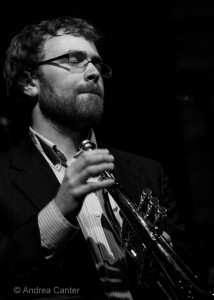 I started in the public school systems in Grand Rapids, MI. No one in my family was a musician so I learned everything from the schools. I originally wanted to play french horn, but was convinced otherwise to play trumpet by my parents because they thought the size would be better for carrying it on the bus. I can’t thank them enough now!! The only other musical background I had before that was learning the “Mission Impossible Theme” on a keyboard by a family friend – even with that, I had a great sense of excitement creating even that little music. It was just a foreshadowing of what was to come.

In seventh grade I somehow got a “Big Band Classics” CD played by a random orchestra that introduced me to all the big band era classics (“String of Pearls”, “Stardust”, “In the Mood”). It was my first introduction to jazz. Later, a “Best of Maynard Ferguson” CD introduced me to to the jazz trumpet world, then the door blew wide open in high school by listening to Clifford Brown (“A Study in Brown”) and Lee Morgan (“Sidewinder”), while being inspired by the music of Charles Mingus (“Mingus Ah Um”). Later in college, some instrumental steps came with Tom Harrell (“Look to the Sky”) and Chet Baker (“She Was Too Good to Me”).

The trumpet is obviously difficult, but I’ve also found it to be quite a psychological instrument. As I’ve grown as a person, I feel as though my trumpet playing has changed and morphed with it. Specifically, I’ve found as I’ve disconnected myself from personal attachment to my performance and grown more in my personal life, my performance on the horn has become much more consistent and personal.

Laurie Frink – My time spent studying with her changed my approach to not only playing the trumpet, but the process of growth. She opened up to me the world of “teaching”, “allowing” and “trusting” my body how to do what it knows how to do. The lessons I learned in her apartment truly changed almost all aspects of how I approach the trumpet – definitely physically, but even more so psychologically.

Dave Douglas – Not only as a trumpeter, but also because of the all around package. His unique approach and sound to his music and playing is so personal and honest, you get a sense that you know him just by hearing his music. His career reminds me of Miles’ career, where as you look at it in the broad view, you see clearly his continual development musically and artistically – it inspires me to be true and honest in my next musical steps. I’m also inspired by the projects and groups that he initiates – including his non performance projects like Greenleaf Records, FONT and his public masterclasses. His continual movement, direction and tenacity in the music world inspires and reminds me to continually be taking a step forward – whatever it might look like.