In Honor of Bobby Bradford

Jazz Standard is proud to host the Seventh Annual Festival of New Trumpet Music series, “In Honor of Bobby Bradford” from October 1 through October 4, 2009.

The Festival of New Trumpet Music, a nonprofit that encourages creative brass music, will present its second Award of Recognition to Bradford during the week’s run. As part of this celebration, Bobby Bradford will convene a Quintet and Octet of long-time associates including David Murray, Marty Ehrlich, Mark Dresser, and Andrew Cyrille.

In addition, FONT board member Jeremy Pelt has convened an all-star group in honor of Bradford. The legendary trumpeter Eddie Henderson will join in a performance of original work and pieces by Bradford that will also include James Zollar on trumpet, and the rhythm section of Marc Cary, Vicente Archer, and Gerald Cleaver. 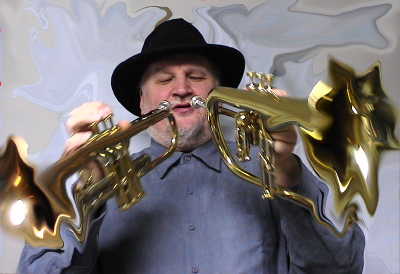 Donald P. Borchert dedicates his newest nonfiction book, Free For All (Virgin Books): “To Greg Bobulinski, jazz trumpet extraordinaire, who reminds us that life is not merely endless commerce.”

Greg Bobulinski’s professional career began at age 13 and has been going strong for nearly five decades. He has worked with many of the greatest names in jazz history from Clark Terry to Red Garland to Big Nick Nicholas; from the JVC/Newport Jazz Festival to the Louis Armstrong House to Saint Peter’s Church; from solo trumpet to full orchestra, throughout the world. Greg has been composing original music for over 40 years and has been the recipient of the National Endowment for the Arts, Meet the Composer, and American Music Center fellowships.

Greg Bobulinski is very proud to take part in the 2009 Festival of New Trumpet Music. Directly applying his long and fruitful experience, JAZZ EXPANSIONIST – GREG BOBULINSKI is a trumpet explorer bringing improvised/expressive trumpet soloing and composition into many diversified arenas of music: classical, Latin, opera, a cappella choir, Native American, religious services, cyclical pieces, poetry, etc. This evening, he will be joined by his longtime friends, colleagues, and performers for the past 25 years: Daniel A. Weiss, Tom Kirchmer, and Ed Balsamo. The evening also marks the release of Greg’s newest CD – Greg Bobulinski G-Men on the Squire Music Media International label. 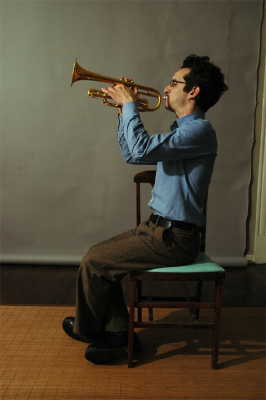 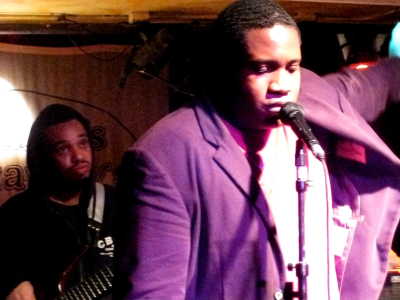 Leron Thomas (originally from Houston, Texas) graduated from NYC’s New School in 2003, known for his identifiable personal sound on the trumpet and his cleverly-written jazz compositions. Leron has played with Billy Harper, Bobby Watson, Roy Hargrove, Lauren Hill, Mos Def, and Bilal, amongst many others. He has performed his material with bands throughout Manhattan, staying focused on developing as a jazz composer and trumpet player but grew tired of the politics and lack of quality music within the New York jazz scene. With a love of music of all genres, alongside the scene’s general lack of support, Leron found ways to liberate himself through a natural, fluid progression into writing and performing what would be known as his ‘other’ music. This genre-less music incorporated jazz, rock, pop, country, electro-pop, and blues. Leron wrote these compositions and played his individual personal tone through his trumpet, while his unique vocals emphasized the diverse sound. His crossover talents were recognized by many, including the New York Times, gaining a favorable review and consistent support. Leron continues to stay true to his art and the objective of bringing real music to the people, with the recent independently-released Improvsensation. 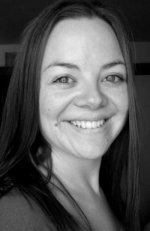 Australian trumpet/flugelhorn player Nadje Noordhuis is becoming known for her lyrical invention and warm, rich tone. A semi-finalist in the prestigious 2007 Thelonious Monk Jazz Trumpet Competition, she has assembled a number of diverse ensembles that perform in intimate jazz clubs, formal concert series, as well as for private events at the Australian Consulate and United Nations. Nadje has been awarded a 2009 FONT Commission to write new music specifically for the trumpet. This work will be premiered by her trumpet, piano, bass, and percussion quartet and will emphasize the classical and jazz traditions of irresistible beauty, fluid melodic lines, and group interplay. Based in New York for the past six years, Nadje is a regular member of many young-composer big bands as well as the acclaimed Diva Jazz Orchestra. She has performed at numerous jazz festivals in Germany, France, Croatia, Australia, Asia, USA, and Canada; at venues including Blue Note New York, Dizzy’s Club Coca-Cola, and Birdland; and has shared the stage with celebrated artists including Tom Harrell, Dave Liebman, and Carmen Bradford. An eclectic composer, Nadje has written and performed music for short films as well as exploratory new music duos with glass percussion instruments. She holds a Masters degree in jazz trumpet from Manhattan School of Music.

The music of Federico Mompou sets the artistic direction of this play-any-where chamber group. Music of Charles Ives, Samuel Barber, the 12th-15th centuries, Siberian and Turkish folk songs, and Mr. McLean’s original work round out the groups’ repertoire.

As recently described by All About Jazz, “Search’s sound and vibe conveys and signals an air of maturity that’s rather uncanny for such a young band. The artists project a distinct sound into these largely, memorable and astutely engineered compositions, teeming with gobs of depth and snaking movements.” Their original compositions, based on motifs, characters, and organic thought, create new worlds of color, depth, tangibility, and exhilaration. The music becomes a theater of sound, taking audiences on a trip of the imagination across time and space, where anything is not only possible, but likely.

Clarino is the duet of quarter-tone trumpeter Thomas Heberer and clarinetist Joachim Badenhorst. The duet’s name refers to the close association of the two instruments. The clarinet (literally translated: “little clarino”) took on the high trumpet (a.k.a. clarino) parts in baroque music after the art of the clarino died out in the 19th century. Additionally, the rediscovered clarino techniques influence the trumpet embouchure advocated by Thomas. Check out his essay on trumpet mechanics on his website www.thomasheberer.com.

Sharing the same musical vision, Thomas and Joachim have absorbed the traditions of jazz, improvised, and contemporary classical music resulting in personal instrumental styles that incorporate both traditional and extended techniques like circular breathing, micro-tonality, and multiphonics.

Thomas Heberer, born 1965 in Germany, living in NYC since 2008, winner of numerous awards, has been at the forefront of creative improvised music for the last 20 years. Having worked with nearly everybody in the field, he is probably best known for his work with Misha Mengelberg’s ICP, Alexander von Schlippenbach, and bassist Dieter Manderscheid.

Joachim Badenhorst, born 1981 in Belgium, divides his time between New York and Belgium. He is active in numerous projects as a co-leader: Mogil (Iceland), Red Rocket (Ireland), Rawfishboys (France), Ploug/Pettersen/Badenhorst (Denmark), and Ryan Blotnick Group (New York). Joachim is a member of the Han Bennink trio. 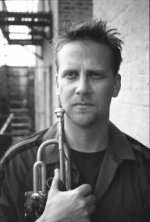 Brooklyn-based trumpeter Russ Johnson is an active performer in the jazz, improvised, and contemporary classical music scenes throughout the U.S. and abroad. In addition to leading his own groups, and co-leading The Other Quartet and New Math, Russ is currently touring as a member of Lee Konitz’s New Nonet and the Steve Swallow/Ohad Talmor “L’Histoire du Clochard” sextet. In addition, Russ has performed with a long list of musical heavyweights including Kenny Wheeler, Bill Frisell, Joe Lovano, David Liebman, Joe Maneri, Oliver Lake, Myra Melford, Anthony Davis, Brian Blade, Tony Malaby, Jenny Scheinman, and Mat Maneri.

For the FONT 2009, Russ is premiering a new set of music featuring three of New York’s most creative musicians: Jacob Sacks on keyboard, Eivind Opsvik on bass, and Rudy Royston on drums.

Lessons with Laurie Frink: Laurie Frink, one of the most respected trumpet teachers working today, regarded as the foremost authority on the Carmine Caruso method, will offer 10 hours of time for private trumpet lessons on June 26 and 27, from noon to 5pm. These free sessions are a unique offering as part of FONT’s educational component. All interested and dedicated trumpeters may contact Laurie directly at

Workshop Session at Sam Ash with John McNeil: FONT has invited John McNeil, one of the premiere jazz trumpeters of the last decades, to present a workshop featuring his Visionary Quartet. John and his group will play several pieces, discuss how the music works and how the arrangements were made, and will address the special challenges of jazz improvisation for brass players. Mr. McNeil would also invite several players to join the group to explore the ideas being discussed, so bring your instrument! The workshop is limited to 25 people. Please register by e-mailing