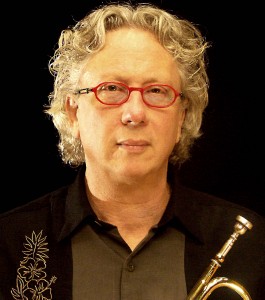 “I started playing the trumpet when I was nine years old. I chose the trumpet because more than any other instrument I was fascinated and excited by its sound and emotional impact. I also thought it looked very hip, like an extension of the soul. I was exposed to Louis Armstrong, Harry James and Doc Severinsen through their television appearances in the early 60’s and was fascinated by the orchestral and big band trumpet sections that I heard in concert.  I also had a record titled A Child’s Introduction To The Orchestra that featured a character named Crumpet The Trumpet.  I was sold on the trumpet!

As a teenager I played the guitar and wanted to be the next Woody Guthrie. I learned tablature and listened to a lot of folk music and early blues. I played the trumpet along with Leadbelly records. This music described what was going on in the streets of America at that time and showed me that music was a powerful and influential force.

I decided to become a professional trumpet player after hearing Ray Maldonado with Mongo Santamaria when I was fifteen years old. I stopped playing ice hockey (which also has a great deal of improvisation) and began focusing on improving my trumpet technique and learning about music theory. I listened exclusively to jazz recordings, performed odd jobs to finance record buying and concert tickets and, most importantly, became aware that jazz is the ultimate celebration of individualism and, with trumpet in hand, to devote a life to self-exploration in the improvised moment that will inspire others to think freely and search for truth is indeed an honorable mission. “

Were there recordings in the beginning that drew you into the trumpet’s sound and possibilities?

“I borrowed LPs from the public library in Dayton, Ohio.  The first record that I borrowed was Miles Davis Friday and Saturday Nights at the Blackhawk.  So the dark and up close sound on that record became my model for how a trumpet should sound and also how a rhythm section should play and interact with a soloist.  I played along with that record quite a bit. I also love Freddie Hubbard’s sound on the Hub of Hubbard.  And what he plays on that recording!  It is one of the best examples of ultimate swinging harmonic hipness.

Bitches Brew was the first record that I bought as a newly released recording and life changed during my first listening. The energy and vibe of the late 60s America was captured and amplified with a cry for freedom and a demand for a deeper understanding of glorious diversity.  Bitches Brew, packed with Miles’ melodic painting, deep grooves and suspenseful space, encouraged me to imagine how music could heroically impact the good future. Miles’ playing always emphasized playing the perfect note to best describe the emotion of the moment.”

“I always give it up to french horn and oboe players first although I am starting to rethink that concept.  My first trumpet teachers were fantastic in relaying how to make music from a phrase or melody. They spoke about dynamics and phrasing but very little about the mechanics of trumpet technique. Consequently, I had to overcome many embouchure weaknesses and then research and teach myself the proper way to play.  Bobby Shew has been a great help and I am constantly asking trumpet players questions about chops, tonguing and breathing. As an improviser I am always hearing ideas that are just out of reach of my technical level, so I devise exercises to enable those ideas and then the next wave of humbling melodies appears in my ear’s mind and the process of improvement continues. Trumpet players are lucky to have such an arduous but ecstatically rewarding endeavor for a life’s mission.  It keeps one young, humble and honest.

Because of the difficulty of trumpet performance and the great service we provide to society, I do believe that the general public should agree that trumpet players should be given first class upgrades on all flights, lifetime alternate-side parking suspensions and free coffee on gig days.”

“John Coltrane for his searching vibe and extremely personal way of combining global spirituality with music. Thad Jones for being a true 100% improviser and for the joy of life that pervades his playing and writing….and for that big smile and those rib-crushing hugs.”

In your upcoming performance you’ll be improvising music to a silent film. What is it that appeals to you about adding a visual element to improvisation? Is it something you do often?

“I have always been fascinated with film music. I will watch films just for the music and ponder the composer’s choices concerning orchestration, harmony, density and space.  Sometimes I wonder if the music is needed at all and sometimes I wish I could mute just the music and add my own.  So the project with Aaron and James is exciting for me because we will be adding a score and it will be improvised.  The film could be considered the soloist that we are accompanying or maybe as just another member of the band although the film’s interaction with us is, of course, limited. It is very easy to play literal ideas to support the visual but I think a more interesting approach for the musicians is to portray the core emotion as abstractly as possible.  This enables each audience member to freely interpret the integration of music and film on a personal level rather than being told what to feel. For me this is the primary mission of any film composer or any group of two trumpeters and a vibraphonist improvising to a Japanese silent film.”