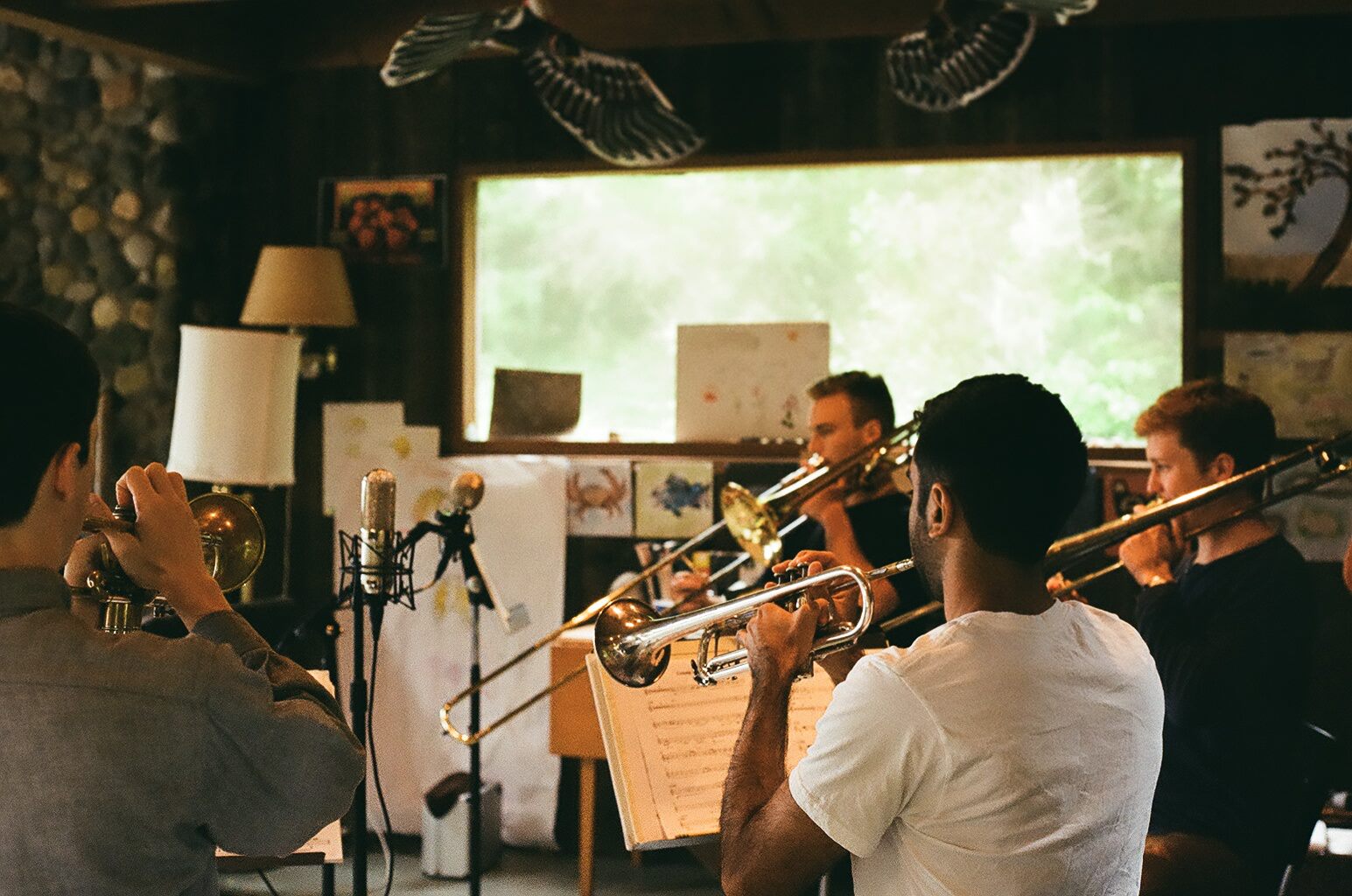 You’re all from Seattle, correct?  But how did you all meet and how did this project come together?

We all grew up in Seattle and went through the great jazz education programs in the public schools there, but we didn’t start playing in this configuration until we had all relocated to New York. In late 2011 we got together to try playing as a brass quartet, starting with more standard brass repertoire, Bach chorales, and free improvisations. It was really magical, so we started composing our own music and over the last two years gradually expanded our repertoire to include music from each of us as well as some of our favorite composers. The best thing about this band is that the four of us would be making music together no matter what instruments we played, as we were already friends and just love each other’s musical sensibilities.

Some of your tunes tend to flow beautifully from this somber and traditionalist brass carol into free improvisation, and then the next song will be a mid-century jazz piece or like some sort of angry Duke Ellington.  What music, besides what could seem obvious, inspired the direction of your repertoire?

As a group we think of our music as existing at the intersection of Classical, Jazz, and American Folk traditions, but individually we have extremely varied tastes. We definitely draw a lot of influence from the great composers who combined folk traditions with art music, like Charles Ives, Bela Bartok, and Stravinsky, as well as our favorite jazz composers, like Duke Ellington, Gil Evans, and George Russell. We’re also constantly inspired by the contemporary composers and musicians we get to hear in Seattle and New York, people like Wayne Horvitz, Bill Frisell, Sam Amidon, Nico Muhly, Relatives, etc..

You’ve been known to do some collaborations with vocalists, electronic musicians, etc…. What is your process for finding these collaborations and how do you fit them within the framework of what you’re trying to accomplish as a band?

We love collaboration, it’s been an essential part of this project since almost the beginning. We’ve tried to establish our core identity as an original music brass quartet, but the great thing about our instrumentation is that we can adapt to all sorts of situations. We really enjoy playing as a horn section for indie bands, like our friends The Relatives, but also have played our own music joined by piano and drums (Sam Yulsman and Jason Burger), and recently completed an original collaboration with Juilliard dance choreographer Garth Johnson. We’re very lucky that many of our closest friends are our favorite musicians!

Have there been any collaborations that have really changed your concept?  Like, “maybe we should start working more in this direction…”?

Over the last few months we’ve been working with Composer/Pianist Wayne Horvitz on a new project that features our arrangements of his music from the last thirty years. We premiered the arrangements in two shows at The Stone last May, then spent a week recording with Wayne out in the San Juan Islands of Washington state. Working with Wayne, both in his composer and producer roles, was an incredible learning experience for us, as he has so much experience putting together (and finishing) projects. I think the most significant part of it so far was learning to create a balanced set of music that stands on it’s own; up to this point we’ve steadily composed new pieces but have not had to organize them in to one ‘project’.

On collaborations, what would be your dream match-up?

We had an amazing time last spring collaborating with Juilliard dance choreographer Garth Johnson; the whole experience really opened our eyes to the possibilities of interdisciplinary collaboration. So we’d love to experiment with more modern dance match-ups, a distant dream would be to work with William Forsythe. But we’re also really interested in working with artists in other disciplines, like film, theater, or visual art. Other dream collaborations – Bill Frisell, Nico Muhly, Sufjan Stevens, Radiohead. Fleet Foxes, Sam Amidon.

The album of Wayne Horvitz’s music we just recorded will be released by Songlines around March of 2014, so that project will be our main focus for the next year. After that we plan to do an album of our own music. We’re super excited to play at FONT on September 16th, then head to Seattle for two shows at the Earshot Jazz Festival on October 11th and 12th (opening for Dave Douglas on the 12th!).

Favorite city you have performed that is not NYC or Seattle and why?

We’ve been lucky to play in the beautiful and supportive Portland, Oregon. Double billed with awesome bands, played for open-minded audiences, ate bacon ice cream, what’s not to love?

What was the best audience member comment to you after a show?

We once got some hate-mail from the upstairs neighbor of an apartment we played a show in..it was definitely the most entertaining if not the most supportive! We take kindly to tough love.

Next post “This was a community — 52 strong, plus followers, showing its power and diversity, alloyed through the possibilities of the trumpet.” – Larry Blumenfeld Previous post Douglass St. preview: Lina Allemano