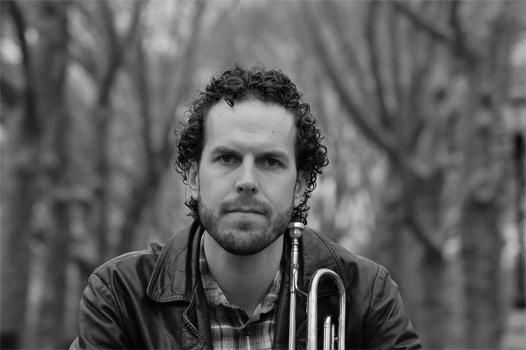 David Smith is a Canadian-born trumpeter currently residing in New York City.  He studied and began his professional career in Toronto, and in 2000 he relocated to New York with a study grant from the Canada Council for the Arts.  Before long he was much in demand on the New York City jazz scene.

His debut album as a leader, “Circumstance”, was released in October of 2006 on the Fresh Sound New Talent label (FSNT 267), and features his original compositions and an outstanding quintet featuring Seamus Blake on tenor, Nate Radley on guitar, David Ephross on bass and the ubiquitous Mark Ferber on drums.  In 2010 he followed that up with “Anticipation” on the Brooklyn Jazz Underground Records label (BJUR 015), featuring Kenji Omae on tenor, Nate Radley on guitar, Gary Wang on bass and Greg Ritchie on drums. While the roots of his music are in classic jazz, he combines elements of classical harmony and counterpoint resulting in a very original compositional style. His approach to the trumpet is also unique, intervallic and harmonically sophisticated yet lyrical and emotional. http://www.davesmithtrumpet.com

Current Projects: I have a couple of compositional “tools” that I’ve been investigating for a few years, trying to explore different ways that they are useful without winding up with the same song every time.  I’m trying to write tunes that balance compositional structure with freedom to go places, always a challenge to strike it right IMO.  Practicing a lot of bebop tunes in twelve keys, and the constant struggle to find the balance between developing as a jazz artist and developing as a working trumpet player to continue to pay for my jazz habit.

On the Side: tube audio, photography

I knew I wanted to play trumpet when… a teacher mentioned that it was possible to make a living doing it.

Did you know… I started playing trumpet in school in Saudi Arabia.  My family lived there for a number of years because of my Dad’s work and it was at an American school there where I began playing and had my first lessons.

FONT this weekend “IN HONOR OF BOBBY BRADFORD”