Joe Moffett refers to his career as “lifestyle” – we here at FONT Music agree that in itself sums up a creative artists world.  An artist’s work goes beyond just a form of income … it’s deeper and more complex.  Joe nailed it on it’s head.  We are honored to be showcasing Joe this year on our second night of Visionary trumpet concerts at The Downtown Gallery on Sept 28 starting at 7pm.

Joe will be doing a full set solo.  That in itself is not only a huge physical feat for a trumpet player, but conceptual one, as well.  No one else to lean on or rely on in any fashion … we can’t wait to hear what he has to present to us.  It was a pleasure chatting with Joe regarding his “lifestyle” as a true forward looking artist, and definitely will strike a chord for all of us staying true to the artist within us.

Thanks for chatting with us, Joe.  We’re so glad to have you on the roster this year with FONT Music 2015!  Let’s jump right into it – you’re doing a SOLO set on the trumpet on Sept 28!  Can you give us some insight into how you’re preparing for this show?

Nate Wooley contacted me a little while back, asking me if I would be interested in doing something at the festival this year.  This is actually my first time really being involved in FONT.  I was flattered to have been asked, and of course said yes immediately. The timing was perfect in a way – Nate suggested I do something out of my comfort zone and I had just recently begun seriously working on solo performance. So this became a good opportunity to present a set of solo pieces.

I have two pieces, “Vector” and the other tentatively titled “Shell.” They 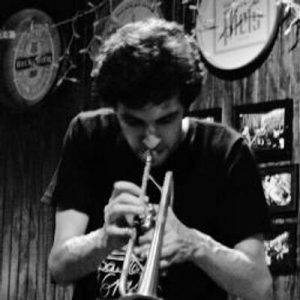 are sonically quite different from each other but both deal with issues of perception, from the performer’s and the audience’s perspective. At the heart of the two pieces – and I say pieces not because they are through-composed but rather are improvisations set within a conceptual framework – remains a focus on individual sound events, their emergence and dissipation. I am being intentionally vague so as not to create a concrete image in your mind prior to the event. I’m excited to do them and am currently fleshing them out more in preparation for the evening.

Wow – thanks for the background and sneak peek at your concept going into the solo set.  We can’t wait to hear it!  Give us a little back story on you.

I started my career (the word “lifestyle” might be more accurate) working in free improvisation and free jazz, starting when I was in my undergrad at New England Conservatory. I was based in Boston for a few years after graduating until I made the move to New York, where I have lived for six years.

So, since moving to NYC, what kind of projects have you been focusing on?  What’s some of your recent projects we should be on the lookout for?

I’ve performed in and recorded with various groups over the years and have most recently been working mainly with two ensembles I co-founded – Twins of El Dorado, with vocalist Kristin Slipp (pictured below) and Earth Tongues, with percussionist Carlo Costa and tubist Dan Peck. The two 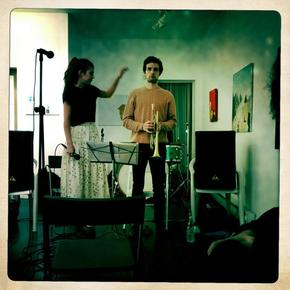 groups are quite different. Where Twins is concerned mainly with new approaches to art song, performs mostly very concise pieces, and uses improvisation sparingly (or more “structurally” rather than an open-ended approach), Earth Tongues focuses on creating long-form improvised pieces, and we are working on a conception that plays with the idea of a performance that borders on installation. And of course there is my solo thing, which I am excited to be developing.

Those sound really intriguing!  You have a lot going on … what can we look forward to in the coming days for the “lifestyle” of Joe Moffett?

It’s hard to say on the long-term scale. Life is mysterious, and a career in music is a particularly interesting challenge. I certainly plan to keep performing as much as I can and try to get out of town more – that will be a major focus. I’m also becoming more interested in taking on projects that are larger in scale than an individual performance here and there. I’m in the midst of planning a commissioning and premieres project with Twins, for example, which will involve more people than just the core group and will of course include material not written by us.

I feel some uncertainty, as probably a lot of musicians and artists do, about what it means to try to develop as (or into) an artist and how that relates to the concept of a career. But I’m working on it.

Man, thanks for being so transparent on what I feel so many artists think about, but don’t always share openly.  I think that’s a really important part of the artistic struggle, but the more we talk about it, the more we can unitedly move forward.  Thanks!

Thanks to FONT Music for having me this year. I’m really looking forward to it.

The feelings are mutual!!

Purchase tickets to Joe’s solo set on Sept 28 (7-10pm) at The Downtown Gallery here. The night will also include two other “visionary” trumpet players and their bands, Jaimie Branch and Brandon Lewis.

Check out this video of Joe with his group, Earth Tongues (Video by Brooke Herr):

About Joe Moffett:
New York-­based trumpeter and improviser Joe Moffett approaches his work with a keen interest in unconventional sounds and forms, collective composition, solo instrumental performance, and the intersection of words and music. He is a regular participant in the improvised/experimental music scene in Brooklyn and is a co-founder of ensembles such as Earth Tongues, Twins of El Dorado and the Kaplan/Merega/Moffett Trio. His material appears on Neither/Nor, Underwolf, Eh?, NotTwo, and Prom Night Records.

Keep up to date on Joe’s blog: http://moffjazz.tumblr.com