As we approach FONT Music 2015 in September to embark on hearing new trumpeters and music, we wanted to take some time on a regular basis to remember and honor those trumpet masters we lost this past year.  This week FONT Music asked fantastic London-based trumpeter/educator, Nick Smart, to reflect on the life and music of master composer, trumpeter and improviser, Kenny Wheeler whom we lost last September.  Below is Nick’s heartfelt remembrance of not only a unique voice in the jazz compositional and improvisational world, but a truly loving and caring individual, in addition to a fascinating video interview with Norma Winstone and Evan Parker discussing Kenny’s life and music:

So much has already been said about Kenny in the many tributes that have poured out, since his passing last September 18th, 2014. Many wonderful musicians have reflected upon the influence of Kenny; that extraordinary sound on the instrument, the stunning compositional output, the creation of a new and identifiable vocabulary as an improviser, and of course his humble, funny and beautiful character. But as we approach a year since we lost him, I would like to share a few memories and thoughts about the great legacy, both musical and personal that Kenny has left us.

I was asked to speak at Kenny’s funeral to try to articulate to the family, who are not musicians, just what he meant to the jazz community and why he was held in such high esteem. Here is part of what I eventually came up with, after much agonising, to try to convey why he was so special.

“The enormity of what Kenny achieved, and has given to the world through his music and recordings, is almost impossible to express in words. To understand it is to understand that just one of his achievements would in itself be remarkable for anyone else; to create a sound on your instrument through which a single note makes you instantly recognisable around the world would on its own be some sort of holy grail for a ‘normal’ musician. But to add to that the immeasurable impact he had on jazz music throughout the world, as a composer and as a player, meant that in the end he was simply peerless.” 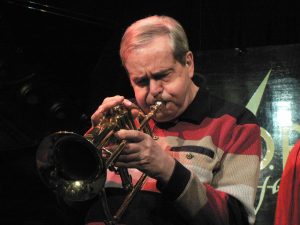 But this got me thinking, there was another intriguing side to Kenny that I saw over and over again, something beyond his musical gifts. It seemed to me it was more to do with the way he made other people feel. In all my travels meeting new friends and discussing music and musicians, like we do, I realised that whenever I chatted about Kenny with someone who knew him personally, there was invariably a sense of actual affection for him. Love, even. Not just the usual respect, admiration or fondness one usually gets from a fan or friend, but something more than that, something deeper, something more personal. Speaking for myself, I certainly have not known someone so universally loved by all who came across him. There was something about his manner that seemed to make people feel better, I guess it left a deep and lasting impression to be spoken to as an equal by someone you knew was really in another universe. His generosity and humility inspired the rest of us to feel that just maybe, we could achieve more as artists. And of course, there was no pretence about Kenny’s own opinion of himself, nor the affably self-deprecating humour through which that was expressed.

It is an interesting time to write this piece as I am in the middle of co-writing Kenny’s biography at the moment, along with my friend and great trumpeter/educator Brian Shaw from Louisiana State University. As you’d expect (and hope!) we’re uncovering many things we never knew, some big, and some small hidden gems – like him being a fantastic vibes player, being fired from James Last’s gig because he couldn’t do the dance steps, or taking a mail-order course in advanced algebra to help with composition. But the most striking thing we have uncovered can be summed up in one word. Busy. So very busy. The studio sessions, the TV shows, the sideman work, the big bands, the writing commissions, the teaching, the guest spots, the band leading, etc etc… the sheer breadth and volume of what he threw himself into is not only breathtaking in itself – but when you consider the equally necessary breadth and volume of skills needed to be able to actually do all those things, and to the level he did them… now THAT is a legacy. The openness and integrity he gave to each new musical situation and the way he treated his fellow musicians along the way, now that is a meaningful life lesson. In all the most positive of ways, that is what Kenny can teach us about the way we move forward in our own lives, as musicians, as instrumentalists, as people. We might never write something as perfect as the “Sweet Time Suite” or play a solo as perfect as “Solo One”, that isn’t really something you can learn to do, there is certainly a sort of celestial intervention required to imbue one human with that much heart-stopping beauty, but what we can try to do is live our musical lives by the same principles Kenny embodied; dedication, curiosity, humility, friendship, patience and loyalty.

Finally a word of thanks to FONT, and especially to Dave Douglas, for bringing Kenny over for the 2011 FONT residency at the Jazz Standard – it should be acknowledged here just how much that experience meant to Kenny. His son Mark (who was also with us on the trip) commented after his father’s passing that he thought the FONT trip to New York had given Kenny the positive energy needed to carry on for another couple of years. It was such a wonderful chance for him to catch up with old friends and family members, for some of whom it would be the last time they saw each other. It was moving to see the love and respect in which he was held by the great New York musical community, the sold-out houses, and also to witness the many different areas of his long career from which the fans knew him. That was a special, memorable trip, and huge thanks are due to Dave and all involved at FONT for the special work of this wonderful organisation.

Nick Smart is a British trumpeter and head of the Jazz Department at London’s Royal Academy of Music. As a close friend and colleague to Wheeler, Nick played in the last incarnation of Wheeler’s UK big band and worked closely with Kenny in arranging the

KW archive of original manuscripts to be housed at the Academy, as well as setting up a KW prize in his name. In 2013/14 Nick curated a museum exhibition at the Academy telling the story of Wheeler’s life, which has loosely become the template for the forthcoming biography by Smart and Shaw.  Check out his music at: http://nicksmart.co.uk/