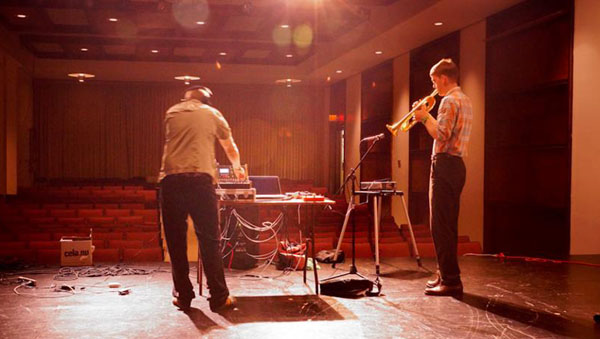 The RPE Duo is a trumpet and electronics collaboration between friends Matt Postle and Radek Rudnicki, focusing on collaborative sound-crafting with heavy emphasis on improvisation and sonic exploration and the interaction between live trumpet and electronics. As they prepare for their show at the Village Zendo on Saturday, September 14, I had the opportunity to speak with Radek and Matt about their process, their upcoming projects, and how to run a band with an ocean in-between.

Andrew Oom: How did you guys get together on this project and how has the geographical separation affected your music? Have there been any issues or, more interestingly, any positive outcomes due to this setup?

Radek Rudnicki: I come from Poland and have been living in England for 7 years now. We met at the University of York in 2008/2009. RPE Duo was part of submitted folio of pieces for both mine and Matt’s PhD. We toured it in UK before Matt went back to USA. It is definitely more difficult to work on the distance. I recorded every gig on last tour and that made us 3 new tracks on the album. I took these recorded performances, edited the best bits, processed again or added drum parts on top. Following ones came from sending recordings back and forth via the internet. Long breaks without playing together make the set much fresher once we are back together, so the new material comes out.

Matt Postle: I’m originally from Seattle, but we first met while I was studying for my PhD at University of York and Radek was completing his Masters/PhD at that time. My research revolved around six separate projects that dealt with the challenges of improvisation in composed music, alongside co-creative processes in music and achieving a “band sound” no matter what the material was (i.e. personal composition, “free” improvisation, or a cover). I wanted to work with electronics for one project and everyone told me to get together with Radek. We performed extensively throughout the UK and Europe from that point forward until I left in the end of 2010. I think Radek and I are such good friends and had so much time together learning our mannerisms, styles, and so on, that whenever we get to play, it tends to click right in. That also comes from so much time spent away from the music, communicating to each other about our lives, other projects, and the future of our creative output. If there is a positive outcome due to our long distance relationship, it is that we know when we do get together we have to make the most of it!

AO: So much of the music is improvised, so how does that play into the compositions?

RR: We started with establishing themes, general guides for the pieces: rhythmic, ambient, melody etc. and I made few loops for each. We were improvising the order of these themes from the start. Now we mix them with one another. I might be playing bass from groovy and ambient parts from another track and Matt could do melody line from different project – Nirvana’s pieces for example. It’s a lot about listening to each other and responding and coming up with new material. I also resample quite a lot. Therefore, new patterns come to life adding new textures or even leading to creation of new tracks.

MP: Well, actually to an extent it is almost all completely “improvised”. I put that in quotations because of course the idea of music being 100% free doesn’t really exist.

I believe instead of “compositions” we more aim towards general sound worlds. When we first started to work together, these worlds were roughly 10 minutes long and dealt with themes such as ambient, noise, rhythm…etc… Before our first major performance in 2009, we decided to meld these ideas together to make more of a sound collage (foregoing any breaks between moods).

The most important thing from my end was never to play on top of the beats, or lay down ideas after he developed his loops. I wanted to be inside of his sound as much as possible (even on the acoustic end), and allowing Radek to further my sound as a part of what he creates. I think it could sound to “clubby” if we were just layering stuff on top of other stuff.

RR: We stripped down the setup and made it even more portable now. I’m using Elektron Machinedrum for drums and samples and Octatrack for sampling and mixing whatever Matt and I are doing live. We also have circuit-bended Speak & Spell which took place of vintage EMS VCS3, that we had access to in York and used on the first album.

MP: Trumpet, some mutes, and a circuit bent Speak and Spell. Sometimes I will find other objects like a bucket (but I guess that is just a mute really).

AO: Who are some artists that you have looked to model your approach, if any? Do you see yourself falling into a specific community?

RR: Probably 70’s dub because of mixing and processing the material live. I love King Tubby’s dub, for example. While making beats for this project I was revisiting my interest in early 90’s hip-hop and sampling. I used to cut the samples from jazz records, this time having live trumpet felt like luxury.

As for the community, I’m working a lot with few really good improvisers from Leeds. There is strong scene in there, and of course feeling lucky to be invited to FONT.

MP: Artists I admire on trumpet that fit this project: Arve Henriksen most of the time. I think his thought process on the instrument is something I would like to get at some day. It probably is similar to what a lot of other trumpeters (and other instrumentalists) are doing, but trying to recreate the possibilities of what the instrument can do.

As far as a specific category, I’m not sure, it seems challenging to get booked at jazz festivals (because we are too electronic-based) and then at contemporary festivals it is too “jazzy”. We have had some really great gigs at a variety of festivals, venues, and universities so I shouldn’t be too negative.

AO: Have you had any collaborations or do you guys have any that you would like to happen?

RR: Yeah lots of collaborations recently. Would love to do solo album for once! Most recent one is RPE Duo’s collaboration with NASA Goddard Institute for Space Studies and Stockholm Environment Institute. We are preparing few surprises for you at FONT festival.

As for the other projects, my main one in the UK is Space F!ght with James Mainwaring (sax) and Tom Adams (guitar) and Jakub Hader (visuals). Like RPE Duo it is groovy electronic music with acoustic improvisation but as quartet (visuals being the 4th instrument) we closely work with visual artist doing projection mapping. Recently we started using 3D projection screens that literally add another dimension to the set.

MP: As far as RPE Duo collaborating with other bands/artists, not really. We collaborated with theater projects at University of Leeds in 2009, developing a musical score that was improvised based on the subject material, dance movements, and general atmosphere. Last year we had a tour around North Carolina and upon returning to Charlotte we collaborated with one of my groups called the Fat Face Trio (trumpet/melodica, guitar, and tuba). I also rounded up a lot of some great improvisers in Charlotte to do a free-for-all at a great local venue called Snug Harbor.

We do however have quite a unique collaboration with Radek’s work (Stockholm Environmental Institute) and NASA of all things. When I arrive in NYC for the FONT festival, we have one day to rehearse this new collaboration before we perform it at NASA Goddard Institute for Space Studies!

AO: What is your favorite city in which you have performed and why?

RR: Any city I haven’t been to before and come to play music is my favourite. Loved both gigs in Asheville, NC as it was linked with Moog factory visit on top of that. Also recent Space F!ght gig in my hometown was pretty cool as I’ve never played in there before. Was great to play for my friends and family as otherwise they wouldn’t have a chance to see us live.

MP: I think my favorite city that RPE Duo has performed in would probably be Edinburgh, Scotland. I think first off every time I visited Edinburgh it was always so much fun (and strangely no rain ever). We had wonderful treatment courtesy of Dr. Martin Parker (Music Lecturer at Edinburgh University) and the rest of the faculty/students. Anytime RPE Duo has played there has been something special about the location and people we meet.

AO: What was the best audience comment given to you post-show? 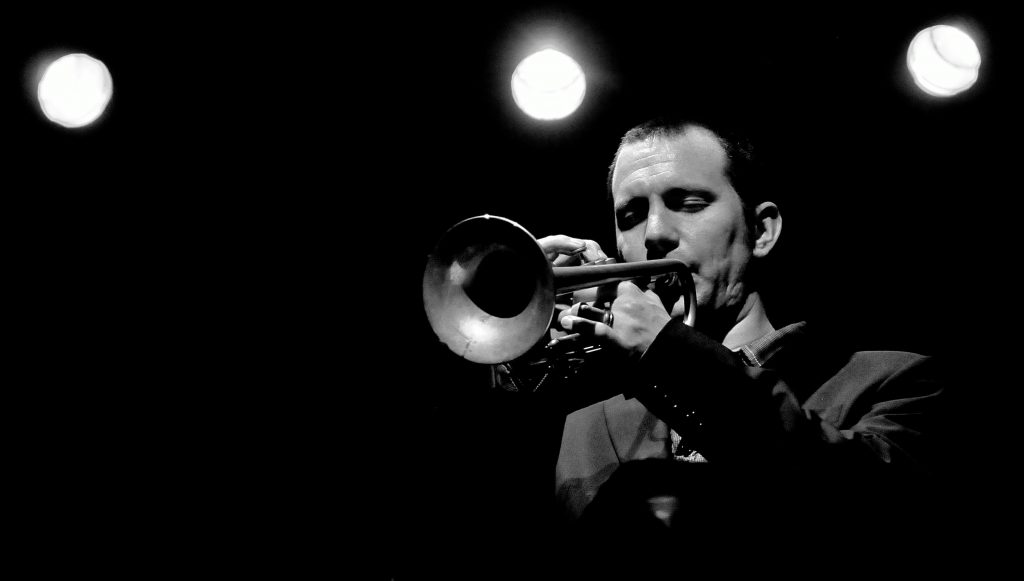