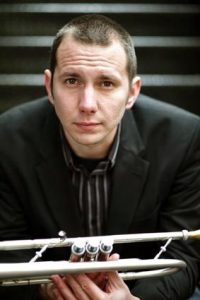 Chad McCullough is no stranger to FONT Music, as over the past few years he’s been involved not only as a performer, but also behind the scenes as one of our graphic designers (see the web banner above – that’s him!).  A diverse performer and composer, Chad is at the helm of the Chicago jazz scene and regularly is performing all across the world, in addition to teaching at DePaul University.  Among his many music projects, his group Chicago based, Spin Quartet has just recently released their newest album, Starting From Zero.

He’ll be joining FONT Music 2015 at Downtown Music Gallery on Sunday Sept 27th at 7pm for our first night of the “Visionaries” Concerts, where he’ll play a duo set with New York pianist, Dan Cray (buy tickets here!).  We touched base with Chad to see what he’s been up lately:

Thanks for chatting with us today Chad – tell us about your involvement with FONT Music over the years:
I’ve been lucky enough to be involved with FONT since 2010. I started just making some small web banner graphics, and now do most all of the graphic design for the festival. I was able to perform in 2013, and will be back this year!
Give us a quick snapshot of your past and what you’ve been up to over the years?
I live in Chicago, and am very happy to be a part of this town’s vibrant jazz scene. I grew up in Seattle, learning from many of the 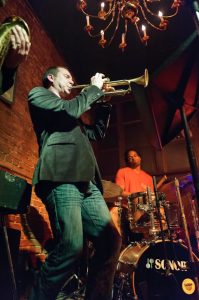 great musicians in the Pacific Northwest. I’ve been in the midwest for about 2.5 years, and teach at DePaul University in the jazz studies department.

I’ve been involved in some extremely rewarding long-term collaborative projects in the last few years. I’ve got a band with a great Belgian pianist, Bram Weijters, and we’ve been luckily enough to tour around the world. My band, The Spin Quartet has been an exciting group to work with and develop over the last few years as well. I also play with The Kora Band, a US-Canadian collaboration called Tunnel Six, and in Chicago am a member of a few very hip (I think!) bands; James Davis’ Beveled, Luke Malewicz’s Heritage Quartet; and just about anything else I can do to keep busy!

Wow!  Sounds like you keep busy!  Enough about the past, what’s on the horizon for you these days?

Lots on the horizon! In September I’m playing at the Chicago Jazz Festival and touring Canada, and a few days in the Pacific

Northwest with The Spin Quartet in celebration of our newly released live record, The Kora Band is releasing a new album with a UK tour in October, and in November Bram Weijters and I will celebrate our latest album with a mid-west US tour. All good things! On top of all of that I’m very much looking forward to starting the upcoming school year, and working with the new students at DePaul.

You also will be joining us here in NYC in September for a set of duo music with NYC (and former Chicago) pianist, Dan Cray at FONT Music’s Visionaries Series (tickets here).  Tell us a little about this setup and your history with Dan.

Dan and I have been friends for a while, and have played and talked a lot about music. This duo project will focus on our original music. As far as pianist in that setting, I really can’t think of anyone I’d rather play with! I’m really looking forward to this show.

Great!  We’re looking forward to hearing that next month.  Anything else you want to leave the trumpet world with til next time?

I’m around at any time to talk embouchures, valve oil, vintage horns, or just get together and play some long-tones with.