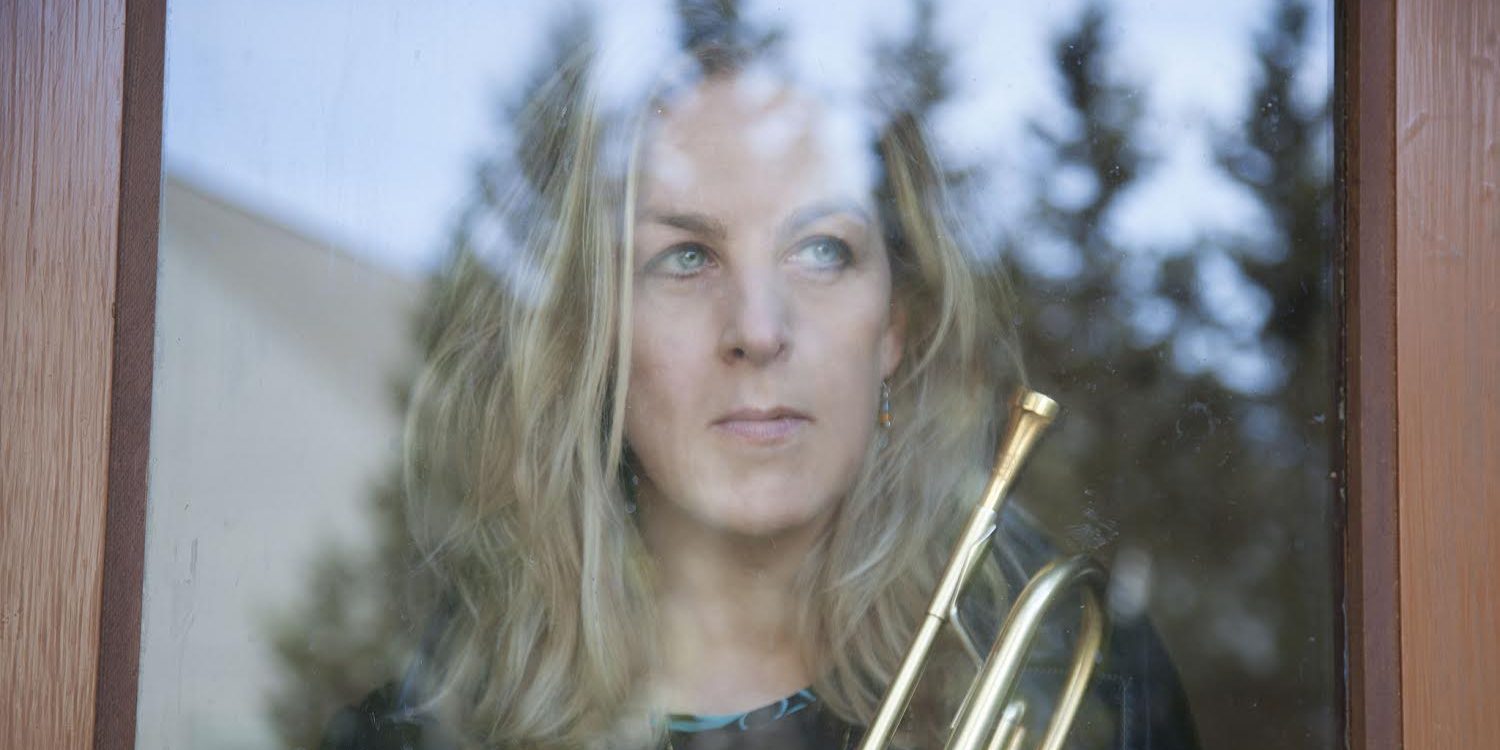 Laurie Frink’s expansive career as a stellar lead player, trumpet technician, and instructional guru is well documented. Lesser known, however, is the substantial amount of private study she quietly undertook concerning improvisation, composition, and electronics. Never eager to improvise on stage, she nonetheless devoted many years in her later career to exploring timbres, scale relationships, and song forms in the privacy of her studio. Occasionally we would get a glimpse or hear a snipped after a lesson, but for the most part she kept this work for herself. Sometimes there would be an email in all caps or a pleading voicemail to the effect of, “CALL ME BACK!…my buttons aren’t working!!!” When we ran over to help, she had invariably wired herself into some sort of discombobulated feedback loop of quarter-inch cables and audio in/outs in pursuit of a new electronic piece she was recording. Laurie, who possessed the ultimate professional ‘game-face’ on stage, approached her composition with the playfulness and slyness of a child playing with toys on a forbidden shelf. The results were equal parts whimsical and beautiful. In 2003, at the first FONT festival at the now defunct Tonic, Laurie pulled a wildcard on the jazz community. Showing a rarely seen side, she premiered her electronic toolkit by leading a quartet of like-minded improvising trumpeters (and a percussionist), each bringing original compositions specifically arranged for the group. The music was free wheeling and bizarre, and while the group performed only this one concert, the impact of the experience was substantial on all involved. This 2018 reunion group features original members (Jesse Neuman, though unfortunately not Nate Wooley) and new additions (Nadje Noordhuis, Ingrid Jensen, percussionist Jeff Davis), and is honored to pay tribute to the sound and spirit of our tragically departed mentor and friend.

Trumpeter and Laurie Frink Career Grant 2014 recipient Riley Mulherkar returns to FONT debuting a new trio, in collaboration with guitarist Rafiq Bhatia and pianist Chris Pattishall. Together they premiere a body of music that blends the acoustic with the electronic through songs old and new, from early 20th century blues spirituals to original music crafted for this unique instrumentation. Bhatia is the first-generation American son of Muslim immigrant parents who trace their ancestry to India by way of East Africa. Early influences such as Jimi Hendrix, John Coltrane, and Madlib—as well as mentors and collaborators including Vijay Iyer and Billy Hart—prompted him to see music as a way to actively shape and represent his own identity, not limited by anyone else’s prescribed perspective. Grammy-nominated pianist and composer Chris Pattishall is a compelling creative presence in the music world, and has appeared with Wynton Marsalis, Jon Hendricks, Jimmy Heath, Donald Byrd, George Coleman, Billy Hart, and more.

“I was lucky enough to study with Laurie when I first arrived in New York eight years ago, and my morning routine today still begins with the exercises she taught me. I am forever indebted to her for the grounded sense of balance she instilled in my playing and my life, and through the Career Grant I was able to pursue my Masters studies and continue lessons after graduation, as I transitioned into the “real world.” The award is a gift not just for the financial support, but for how it has connected me to so many in Laurie’s community – the endless stories of friends and students of Laurie that I’ve met since receiving the award are invaluable.” – Riley Mulherkar