Merci & Thank You for an amazing Festival!

Festival of New Trumpet Music Canada 2015 was dedicated to: 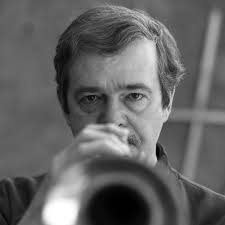 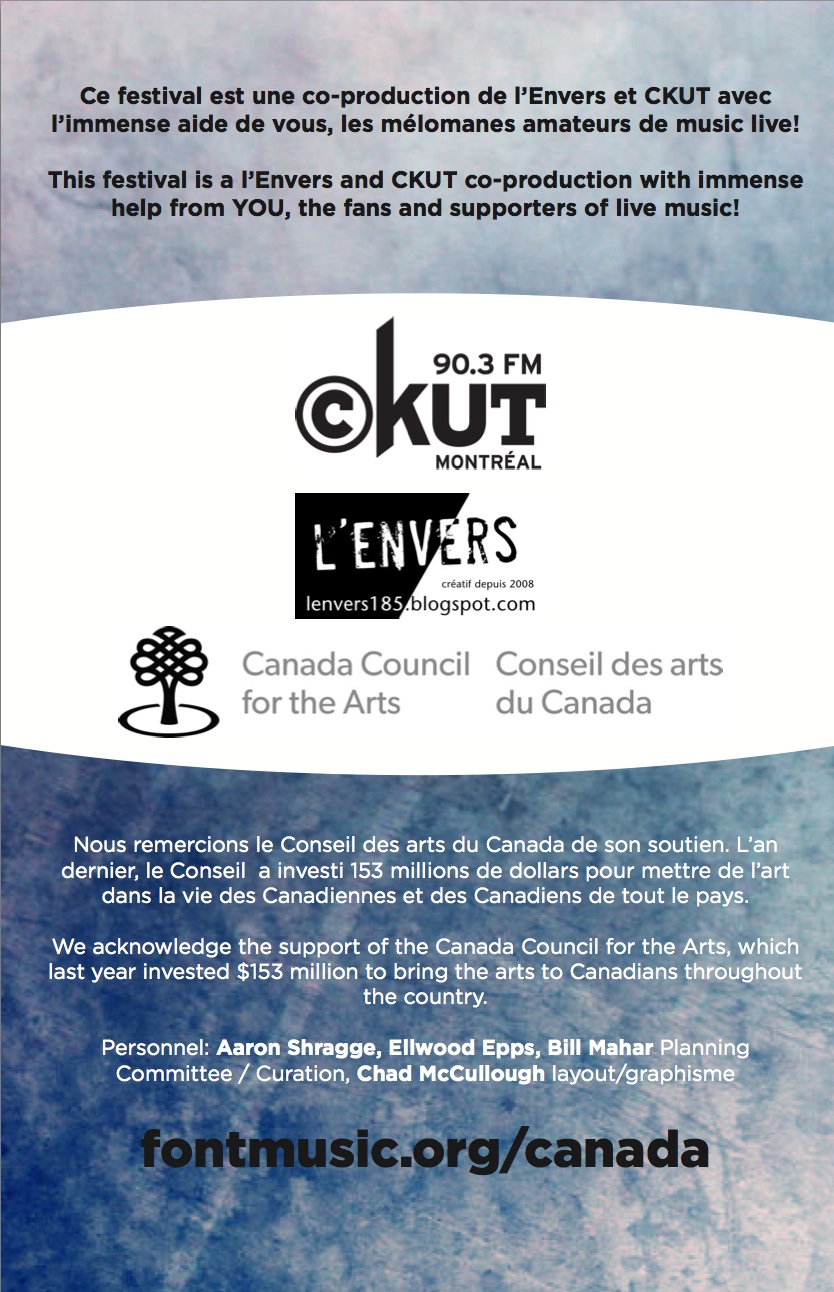 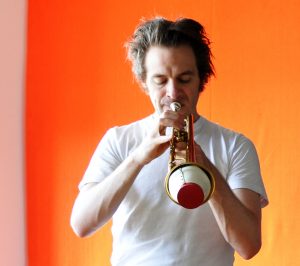 My father and his father had played trumpet, so it was chosen for me. I had wanted to play saxophone, and during highschool I did play some baritone, along with a lot of clarinet, bass clarinet, flute, and piano. I imagined becoming a multi-instrumentalist like Roscoe Mitchell or Joseph Jarman, but when I finished highschool, all I had was a trumpet. It was a bitter pill to swallow, but I’m glad I did. This is probably why I am so interested in sound, and so little interested in treating the trumpet electronically.

It is certainly the hardest of the dozen or so instruments I’ve spent some time with, and the least forgiving. Forget about the general public; I wish the musicians I play with realized how much harder it is to play music on this instrument at a morning rehearsal. One doesn’t just unpack and tune up; it’s more like what an athlete does in terms of warming up, knowing one’s limits, and ultimately transcending them.

In terms of the trumpet, Laurie Frink, Bill Dixon, and Mary Ann Fratia. In terms of the music, David Mott and Bill Dixon. In terms of what’s underneath or behind the music, the practice of Zen Buddhism, the writings of Ken Wilber, and the teachings of Gurdjieff have helped me immensely in making some sense of this life.

Who is your favorite trumpeter today (as in today, the day you are writing this email) and what recorded song available to the public best exemplifies why this trumpeter is so great?

Favourites are ever shifting. Lew Soloff passed away today, and he was such a mighty force in so much good music. In the book Trumpet Profiles, Lew made 4 pages out of a simple questionnaire like this one. He had so much to share. He practiced more, heard more, and played more than almost anyone. People have already heard his solo on Spinning Wheel (Blood Sweat and Tears), and they may also find his work  with George Russell interesting, especially Electronic Sonata for Souls Loved by Nature. 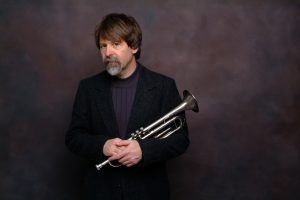 How did you become a trumpet player? I started playing trumpet in grade 11. I had been going to a school that had no band program but changed schools to be able to play a wind instrument. I had thought flute at first, but the music teacher suggested the trumpet might be a better option, he had plenty of flute players already, so I went for it.

Did you play other instruments before the trumpet? Yes, I played classical piano from a young age.

If so, did those instruments inform how you played trumpet? It was very helpful, obviously, because when I started trumpet, I could already read music, knew my scales and so on. I had also done theory rudiments, ear training and played at a decent level for my age, though I was far from a standout.

Or did your view of how music is played change once becoming a trumpeter? Both – playing trumpet was so different. I found the reading aspect very easy compared to piano, but on the other hand, the physical challenges were different. There was a social aspect to playing in band that was so much more fun than piano, which is more solitary.

Were there recordings in the beginning and even years into learning the instrument that drew you into the trumpet’s sound and possibilities?
At first, I listened to Bill Chase a lot, because of his rock band. I knew very little of jazz, except for the pre-bebop music from the big band era, which was great. I had joined a general business band that worked quite a bit while I was in high school and got exposed to swing styles that way. But Chase’s band was amazing to me and it showed me what a great instrument the trumpet really is.People often talk about how the trumpet is the hardest instrument to play. Do you feel this is true?
I can’t speak for other instruments, and some things about trumpet come easily to me. Not high range of course, that has always been a struggle, but I do really enjoy playing the instrument, it only feels like work when my chops are out of shape or I feel physically weak or tired. It’s a great feeling to warm up slowly and them work on music, like improv concepts or just playing tunes. At those times, the trumpet does not seem so difficult.
What doesn’t the general public understand about playing the trumpet that you wish people would realize?
Nothing. The general public has no need to hear about our struggles with the instrument – if I can’t make music they enjoy listening to, that is not their problem but mine.If you had to identify with one or two gurus, trumpeters or otherwise, who had the greatest impact on your musical journey to date, whom would they be?
Art Farmer remains the trumpet player who has influenced me the most, just because I embraced his beautiful phrasing and harmonic approach early on. When I go back to his recordings I am always struck by how much his playing resonates with me. Miles and Dizzy are very present as well, though I don’t thinks I sound much like them and have never actively imitated either. Miles’ introspective lyricism and Dizzy’s fearless abandon are both essential elements of the complete jazz trumpeters voice, I think. Like everyone, I feel both of those things when I play and I practice to be able to express those emotions in the moment.Who is your favorite trumpeter today and what recorded song available to the public best exemplifies why this trumpeter is so great?
I have been listening to Clark Terry, the virtuoso and happy extrovert – so I guess he is my favorite today….many, many recordings of course. Check him out playing Mack The Knife with Oscar Peterson. 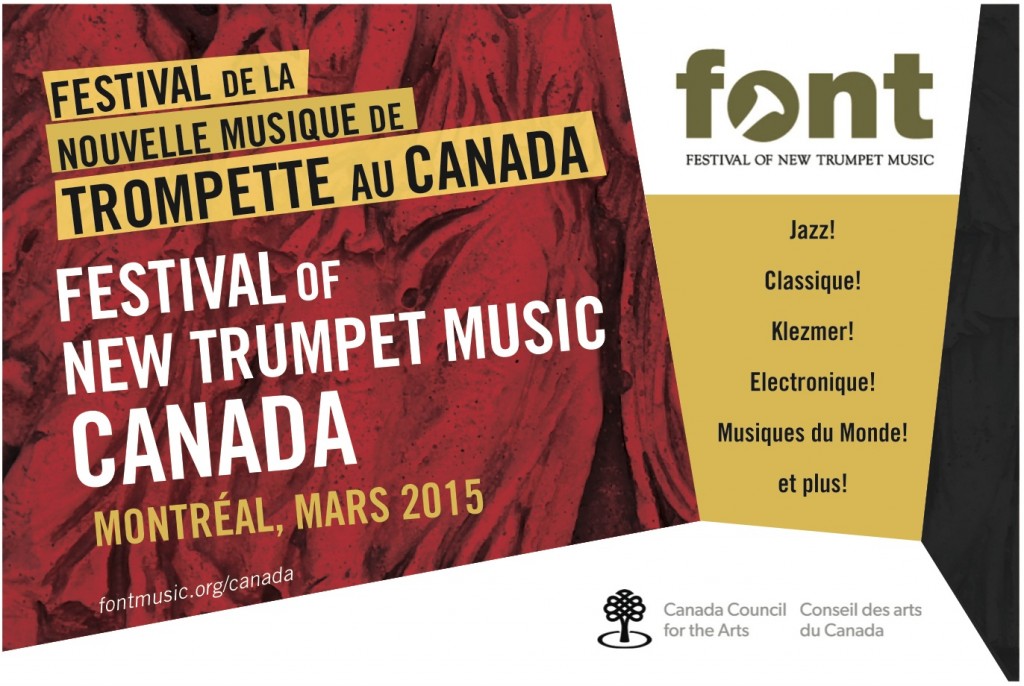 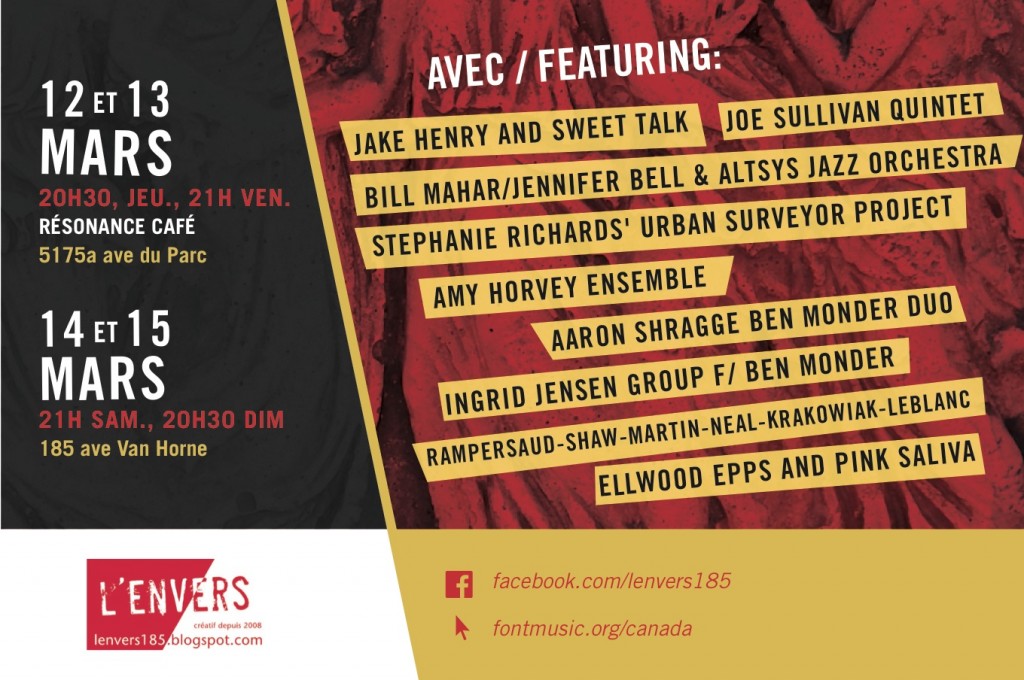 Also, The American Brass Quintet performed as part of the vespers service at St. Peter’s Church in Manhattan. 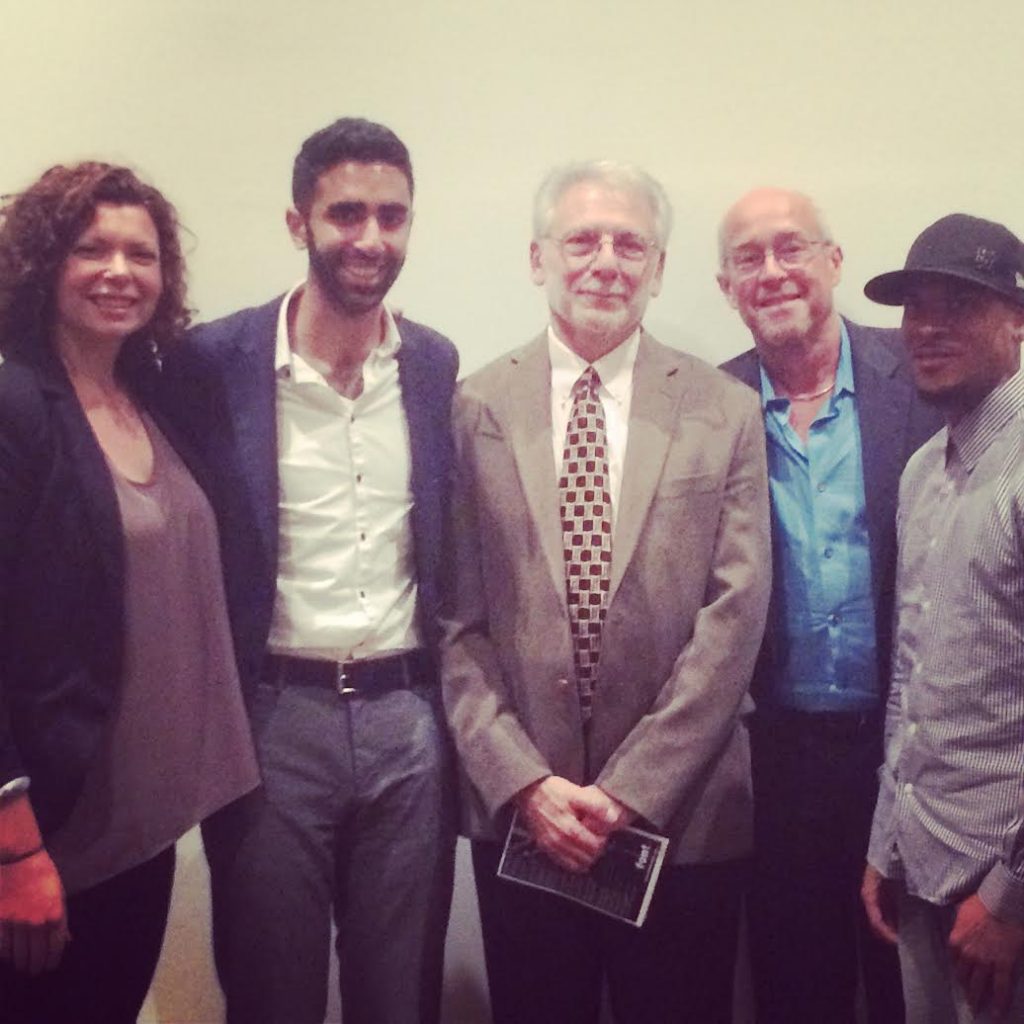 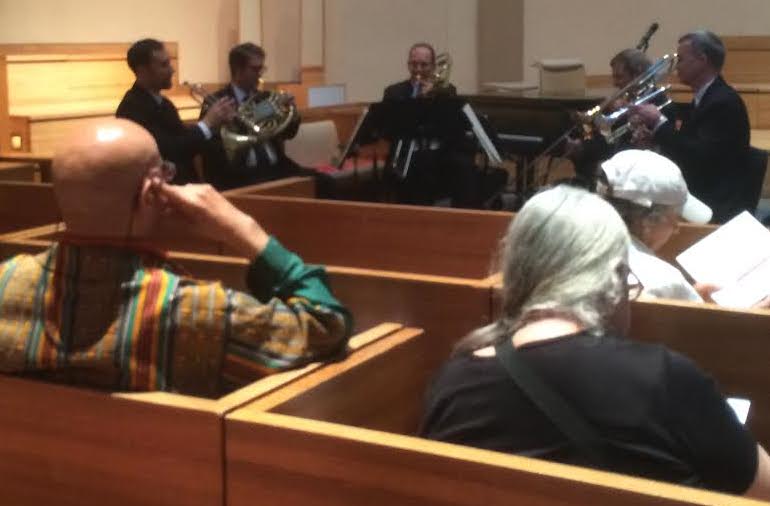 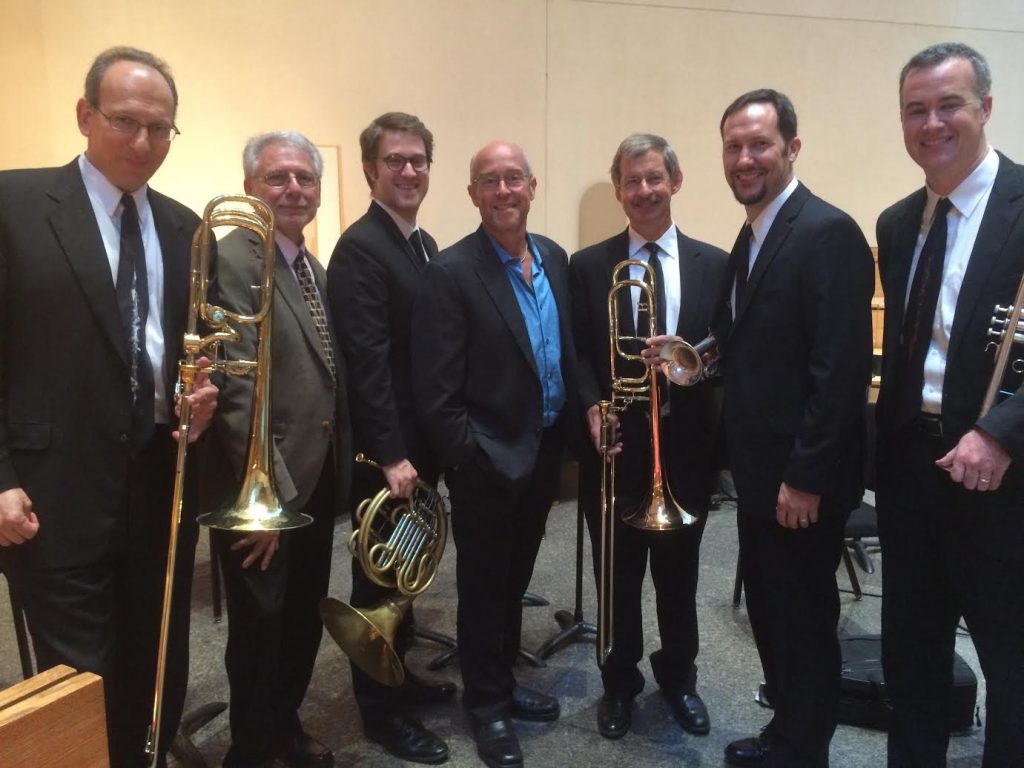 New School alumni concert (attended by trumpet prof. Jimmy Owens) with round robin improvisation, organized by Aaron Shragge. It was a dream team!
Some Alumni highlights: Itamar Borochov just released a new CD: Outset, Sam Neufeld performed an amazing set with his trio at FONT’s emerging series and Aaron Shragge will be doing a solo cross Canada tour in November. 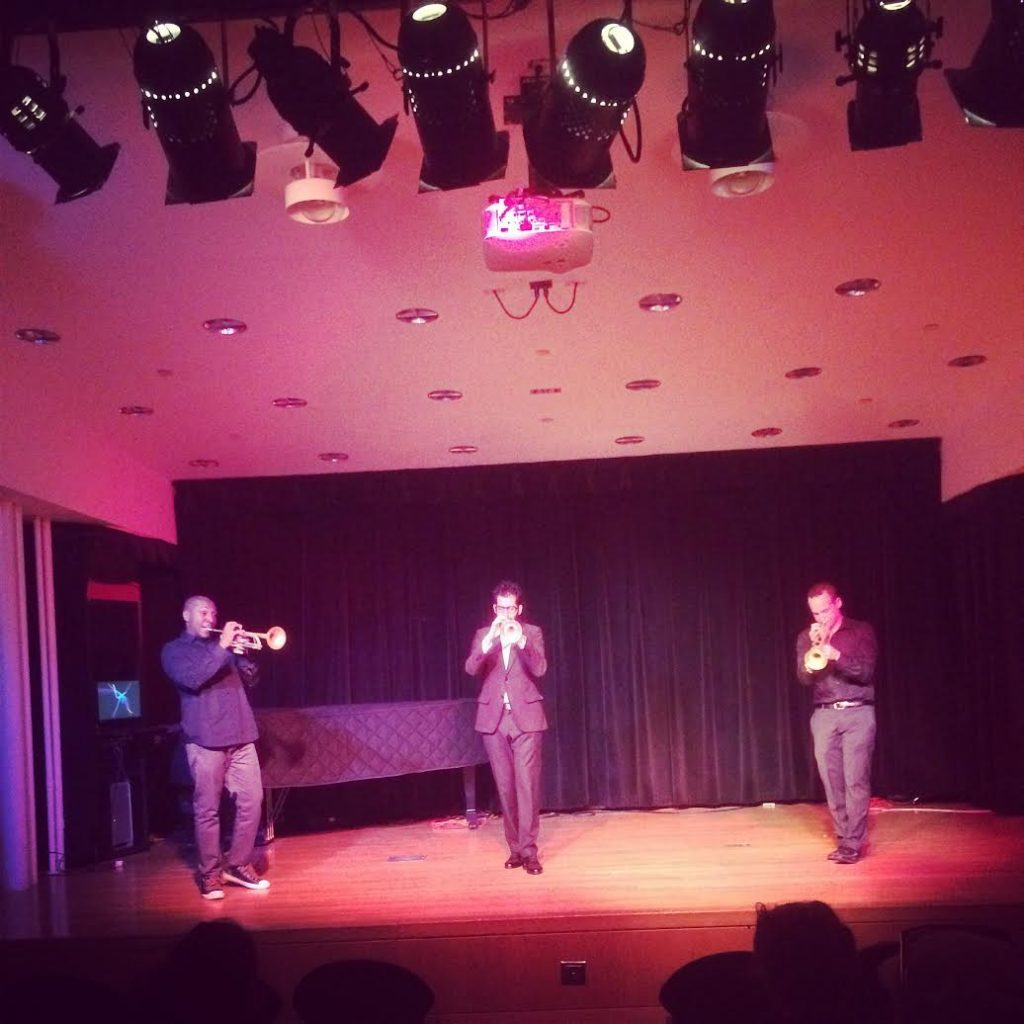 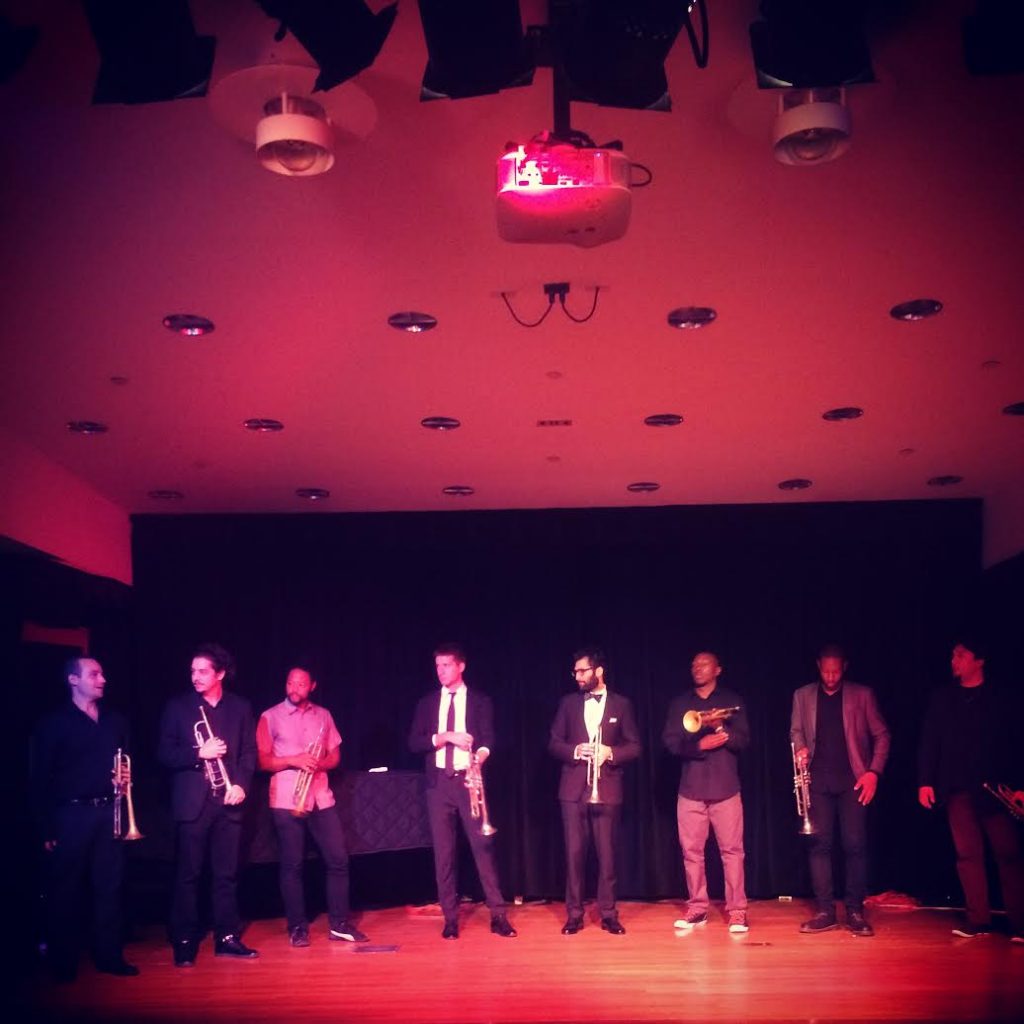 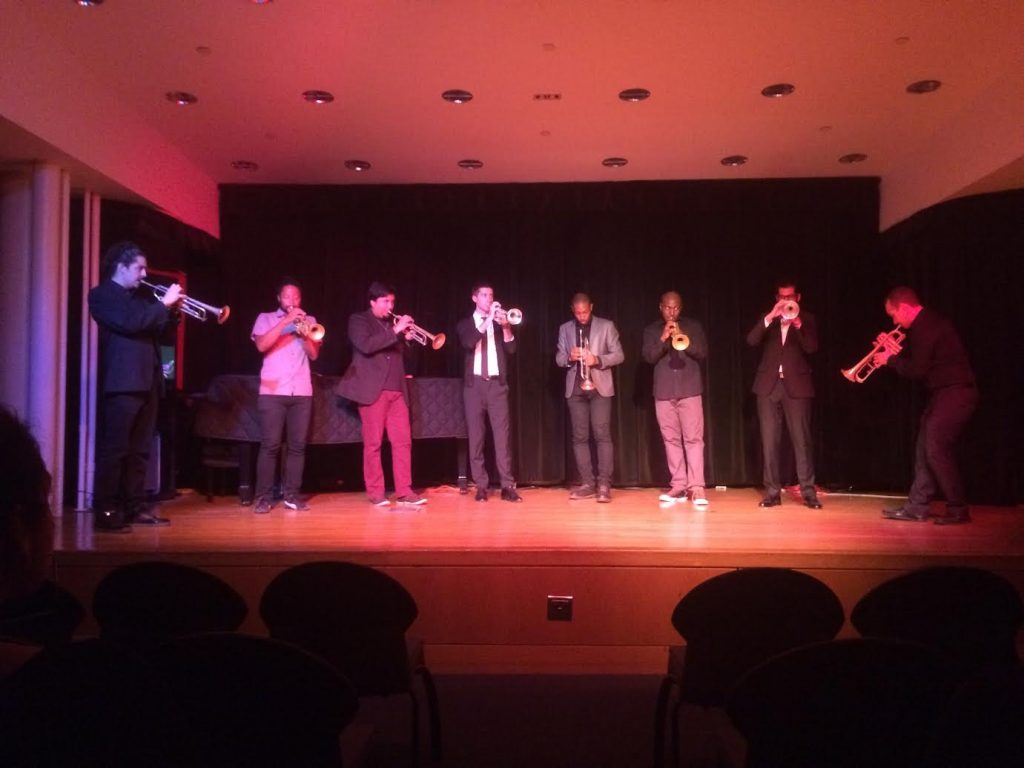 The American Brass Quintet and The Practical Trumpet Society played a mixed program of new music from John Zorn and Stephanie Richards, as well as pieces by Gunther Schuller and David Sampson. Astounding sound in the Mannes Auditorium. 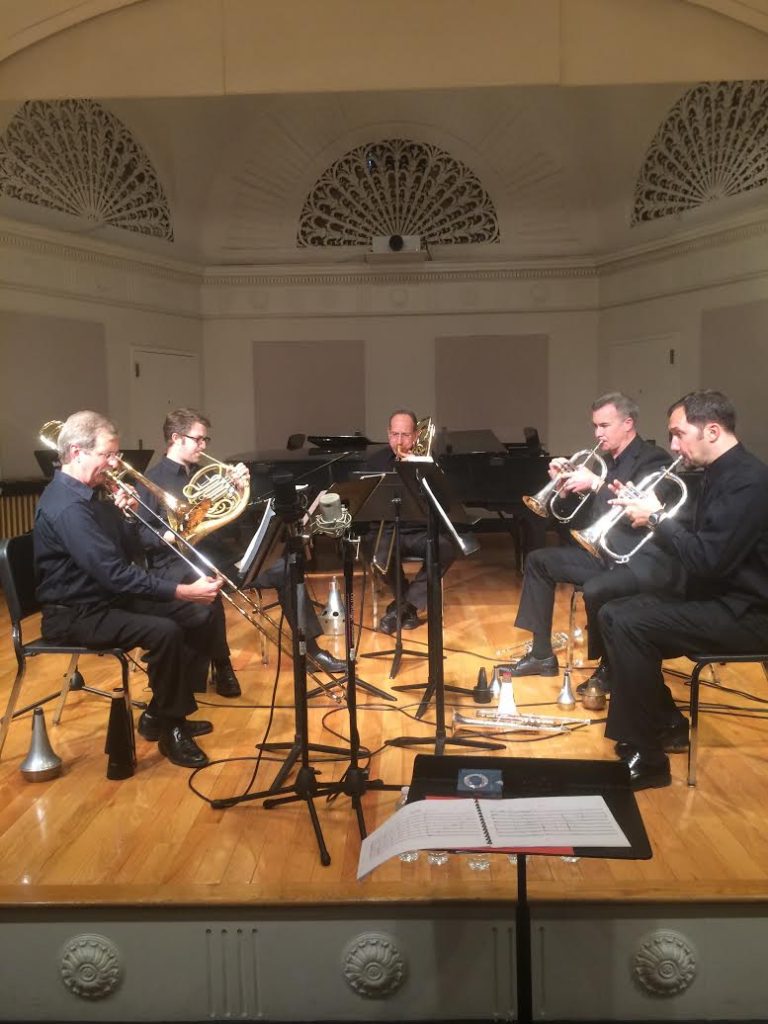 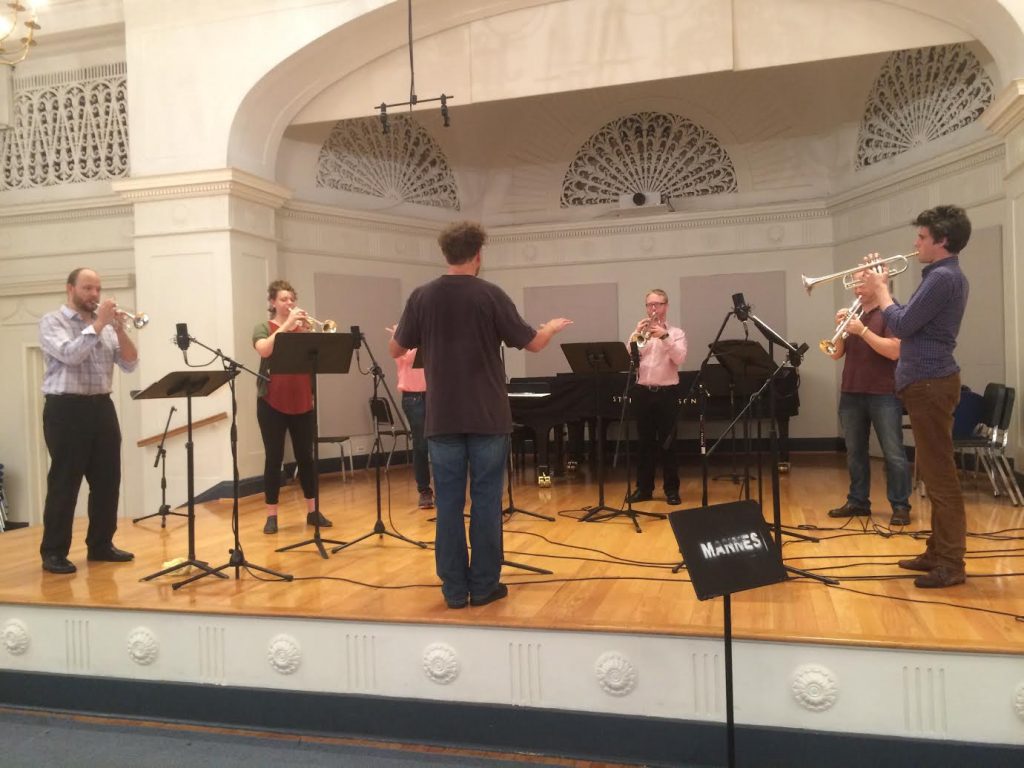 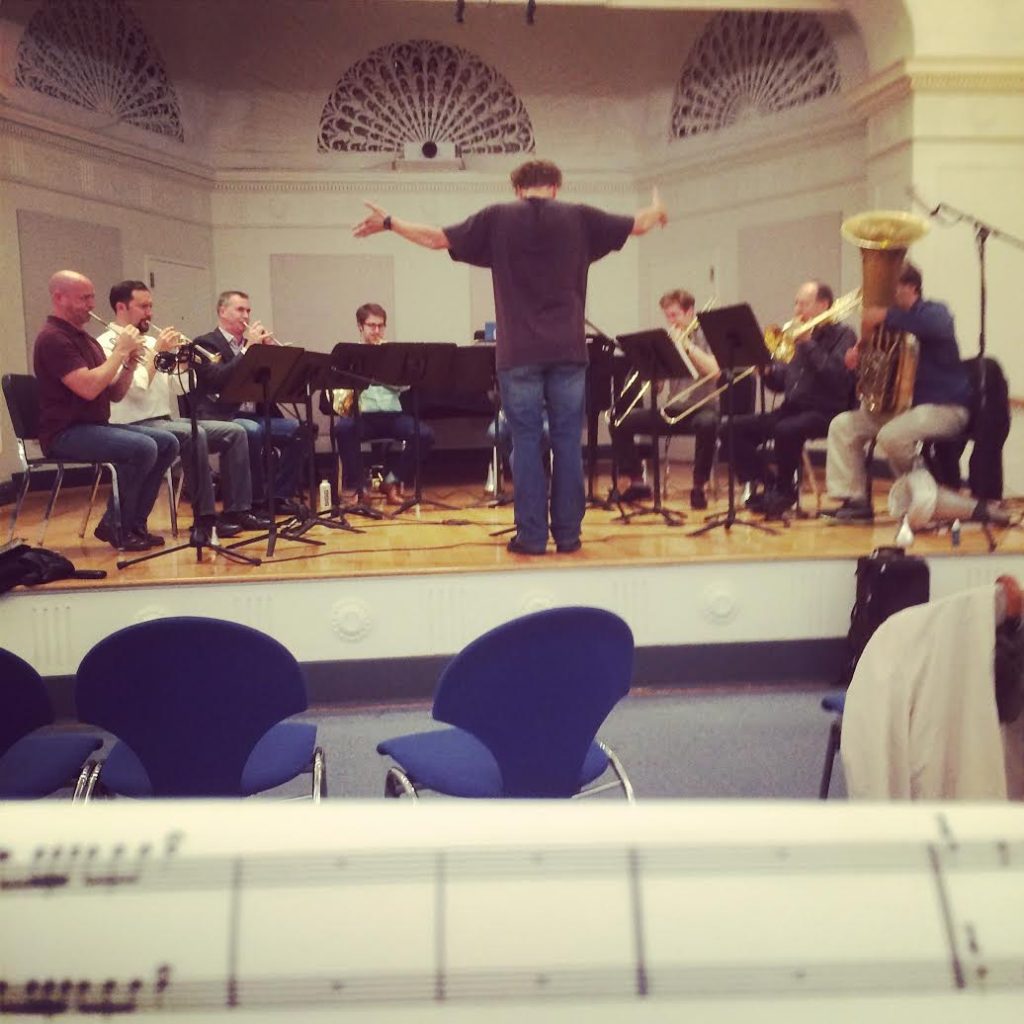 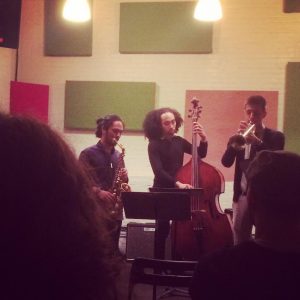 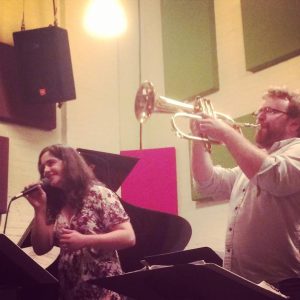 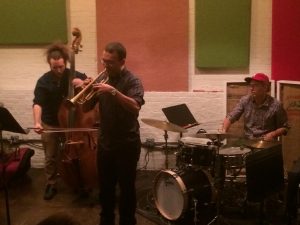 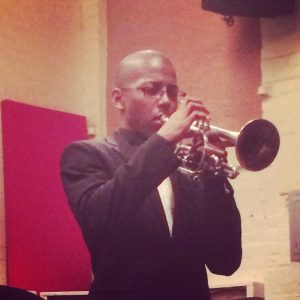 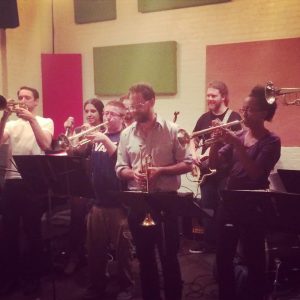 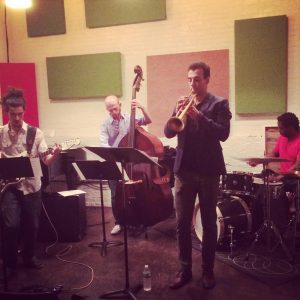 Three great trumpet players with three extremely distinct visions of what one can do with the instrument and electronics. Rockwood Music Hall. 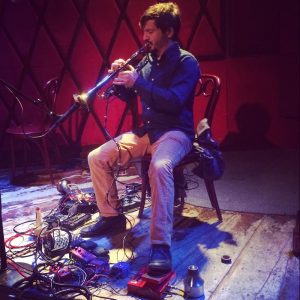 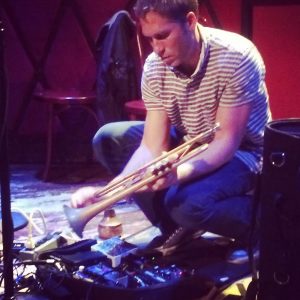 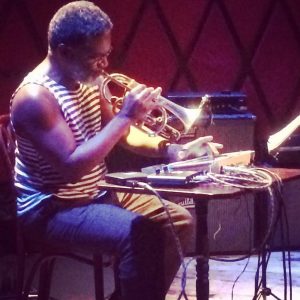 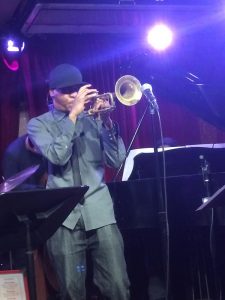